Our website is made possible by displaying online advertisements to our visitors. Please consider supporting us by disabling your ad blocker.

Taking screenshots in latest android mobiles is easy now. In earlier the process of capturing the screenshots is a difficult process which needs rooting of the device. With the latest technology nothing is difficult. Mainly there are three procedures to take screenshot.

Front Step: Open the screen to capture and follow the below process.

Caution: If you press power button too early, power option displays. If you press volume down button, volume controls are displayed. So make sure both pressed at once to have a perfect shot.

In samsung mobiles the volume down key and home button(clickable button) need to be pressed at once for screenshot.

In some mobiles, we have to open the screen to take screenshot and 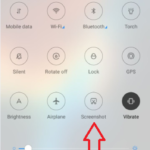 I will discuss about screenshot apps later in separate article.

Hope you liked the article. If a you have any questions or problem in taking screenshots please let me know by commenting below. If you like the article please share with your friends & family.